Skip to content
Contents hide
1) The Real Problem
2) Flourishing in the Strength of a Renewed Mind
3) What You Say to Yourself Matters
4) The Battle of The Instant Replay
5) Seeing a Problem Signals a Solution
6) You Were Meant for More
61 shares
“She’s just become one of those people who thinks the answer to living healthy is taking those pills.” The words stung when I heard them for the first time. She was talking about me.
It had come out of the mouth of someone—who was a good friend. She had known me for years. I was deeply hurt, I was angry, then I was sad because of what she said.
Maybe you’ve experienced this two–fold dichotomy:
1. You feel hurt by a close friend and so you try to convince yourself while burying your hurt and emotions. What do you say to yourself? I’m strong, it’s not me—it’s her issue. You try to just write it off and rationalize why your friend made these comments.
2. You question yourself—what you’re good at and how everyone sees you. Thoughts replay in your mind circling around what you did wrong. It replays again and again. What are you saying to yourself in the process? It’s my problem. It’s my fault.

Perhaps, the thoughts that race through your mind swing from one dichotomy to the other. But the core of all of this is that for one—you feel hurt. Secondly, you know something went wrong.
There’s a problem.
Your friend hurt you, but that isn’t the real problem. It’s not your friend, what she said and it’s not even what you did or did not do to give her that impression.
The real problem is how you think about what has been said about you—what you say to yourself.
When someone says something negative, it’s easy for us to think or say to ourselves, “It must be true because someone sees us that way.”
Or, we start to rationalize what things we have done to make a person say such a thing. The problem with this type of response, is that you are allowing other people to tell you who you are.

Flourishing in the Strength of a Renewed Mind

I wrote about this in more detail in my blog post, Are You Flourishing in the Strength of a Renewed Mind? It’s the Instant Replay…the constant replay of what someone said or how someone else thinks about you. I talk a lot about the importance of positive thinking.
In our culture positive thinking has been given a bad wrap and when someone even mentions positive thinking it results in people rolling their eyes. Positive thinking is a biblical concept.
In fact Paul talks about it in the new testament in Romans and Ephesians. He calls it renewing the mind. Sometimes we just need a little more convincing to believe that this stuff isn’t made up and I’ll tell you—I’m not making it up.
It’s been proven by research.

What You Say to Yourself Matters

Shad Helmstetter, Ph. D. in Motivational Psychology wrote the international bestseller, What to Say When You Talk to Yourself. He has said; “Most of our self talk, somewhere in the neighborhood of 70 to 80 percent of all of our self talk is a duplicate, it’s a repetition of the programming that we got.”

Helmstetter goes on to say;
“In the brain, every time you repeat the same message, it is reinforcing that message in your brain…”
Helmstetter, who’s appeared on CNN, Oprah, NBC, CBS, ABC, and over 1200 radio stations, commonly uses a simple yet interesting image to clearly describe his research. He says that [self talk] its like your brain has a network of highways that have been created, and as you continue to repeat those same messages—its like reinforcing the road with a fresh layer of asphalt.*

The Battle of The Instant Replay

The fight for what goes into your mind is a fierce battle and it’s subtle. Most of the time you’re too busy fighting that instant replay that you don’t realize that God has given you everything you need for godliness (2 Peter 1:3).
Ever catch yourself saying—I can’t or I’m not?
What you say to yourself matters. The wrong words keep you in that perpetual cycle of “this is my life and this is all it will every be”.
With that mindset, life is just a dash on your tombstone that marks the time between your birth and death. It’s a perpetual negative rain cloud hanging over your head. 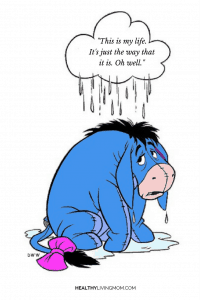 But…the right words become the race marked out for us – the right dash that moves you from surviving—> to thriving. To be honest, you are the problem, but, it doesn’t have to stop there. You are the solution.

Seeing a Problem Signals a Solution

In the case of my friend saying, “She’s just become one of those people who think the answer to living healthy is taking those pills.”—it stung. Why? It’s my passion.
That’s partly how HealthyLivingMom.com got started.
I saw that there was a problem with how my friend viewed me. It ultimately made me sad that she didn’t understand my passion—so I decided to do something about it.
Today, I give insightful encouragement to others by helping moms build a foundation for biblical healthy living.
Be encouraged when you see a problem! It also signals that you are the solution.
Let’s start clearing out those rainclouds!

You Were Meant for More

I’ll leave you with some thoughts to process.
What are you saying to yourself?
Does it start with I can’t or I’m not?

If it does—stop lingering the instant replay.

Start believing that there’s a flip side to it that is good.
Not sure what that looks like? That’s okay, I’m here to help encourage you one step at a time and getting started is as easy as taking the 30 day Renew Your Mind Challenge by clicking here.
*Originally recorded on The Brian Buffini Show Podcast, Getting Caught Talking to Yourself #040 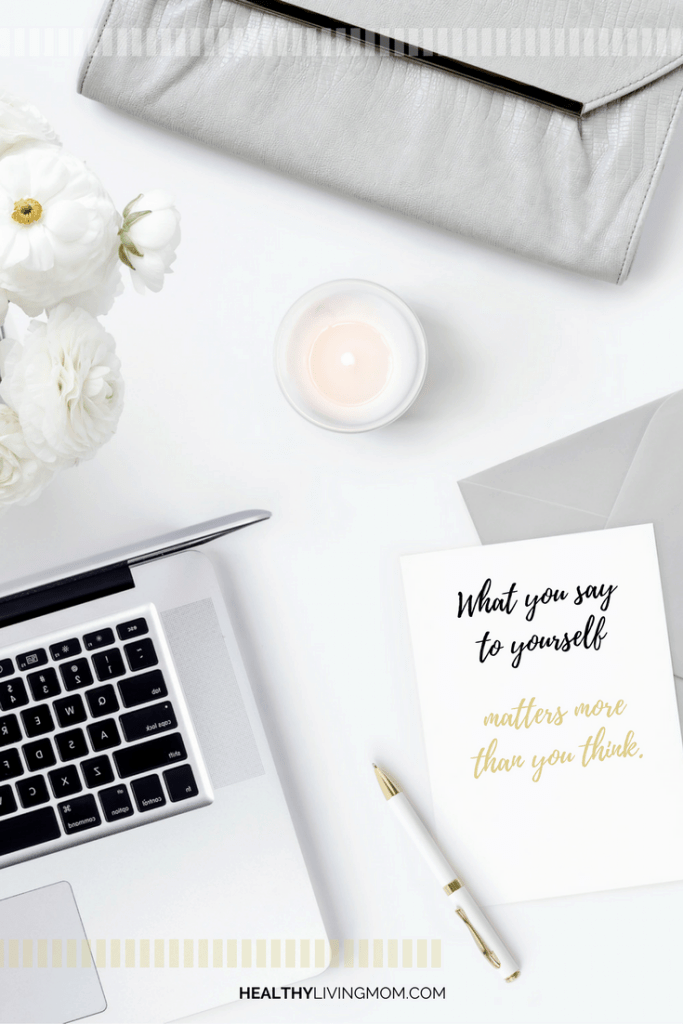 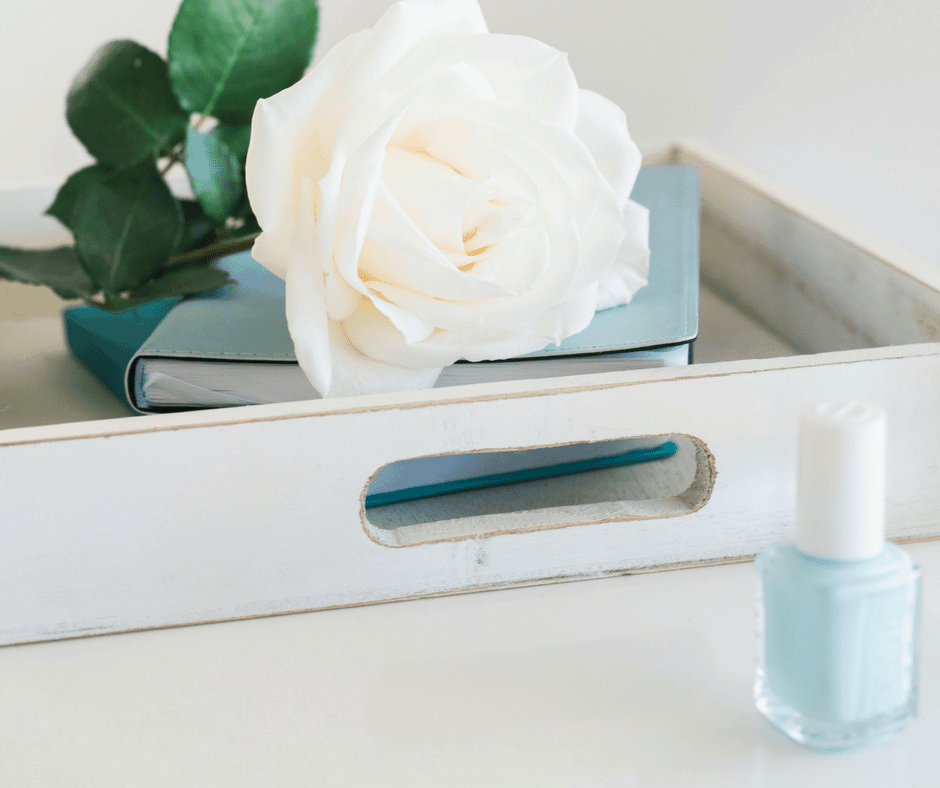 “I can’t wear that look—but you can!” Women keep giving me this compliment. To be honest, I am no different. I too face the same feelings of intimidation by clothing, make–up, and hairstyles. Ladies, I’m proof. You can wear that look and I’ve learned a few secrets that will help. Let’s get started in revealing… 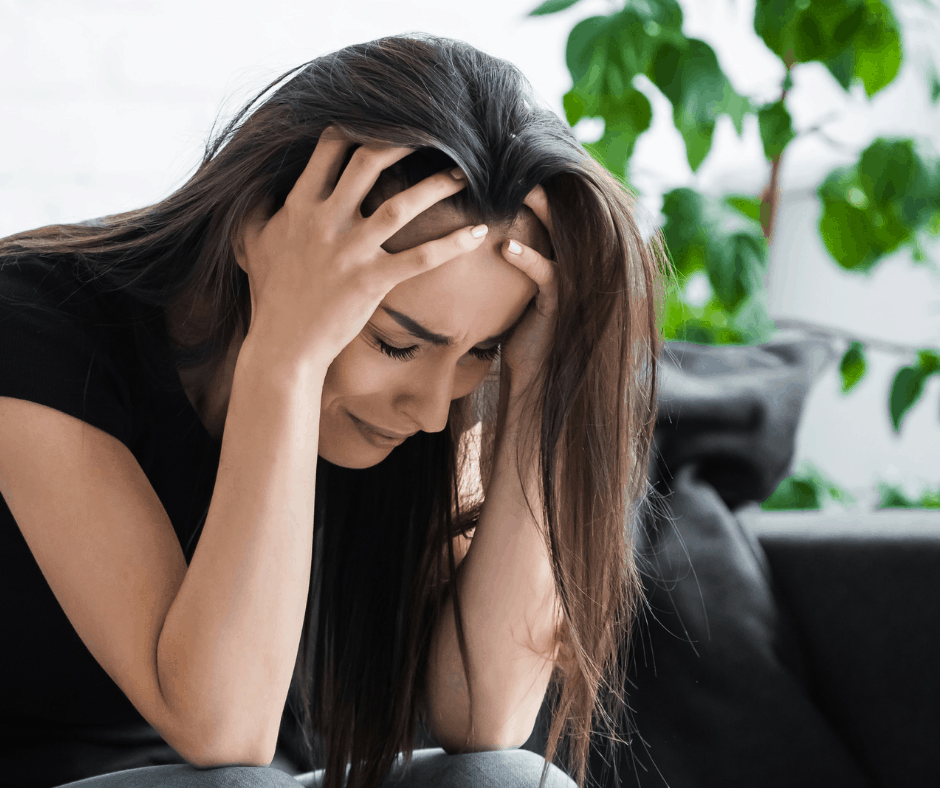 “There was a six car accident on the highway this morning.” Said my husband. I was just waking up when he shared the news with me. Immediately my thoughts went to, “I hope my brother’s okay.” And until I got a text from him saying that he was okay, I couldn’t stop feeling anxious. This… 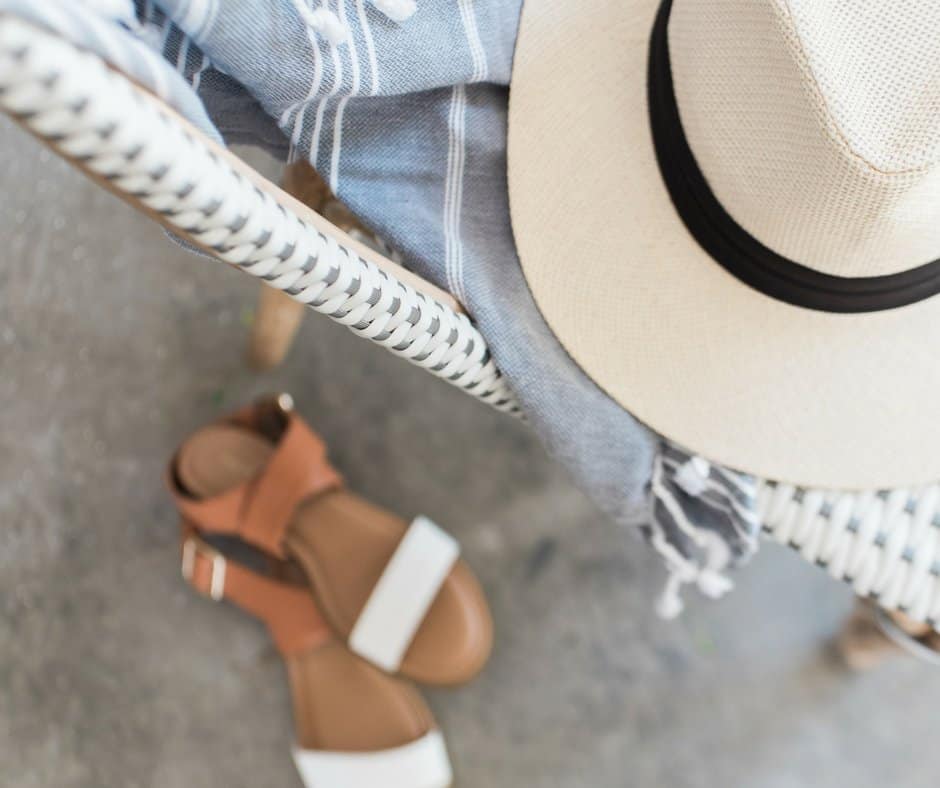 All moms, as soon as they find out their pregnant, are pressured into a striving for perfection. We suddenly start thinking and looking around us—deciding what perfection is and who fits that description. And we look at ourselves and determine we don’t quite measure up. Until, we see the truth. There is no such thing… 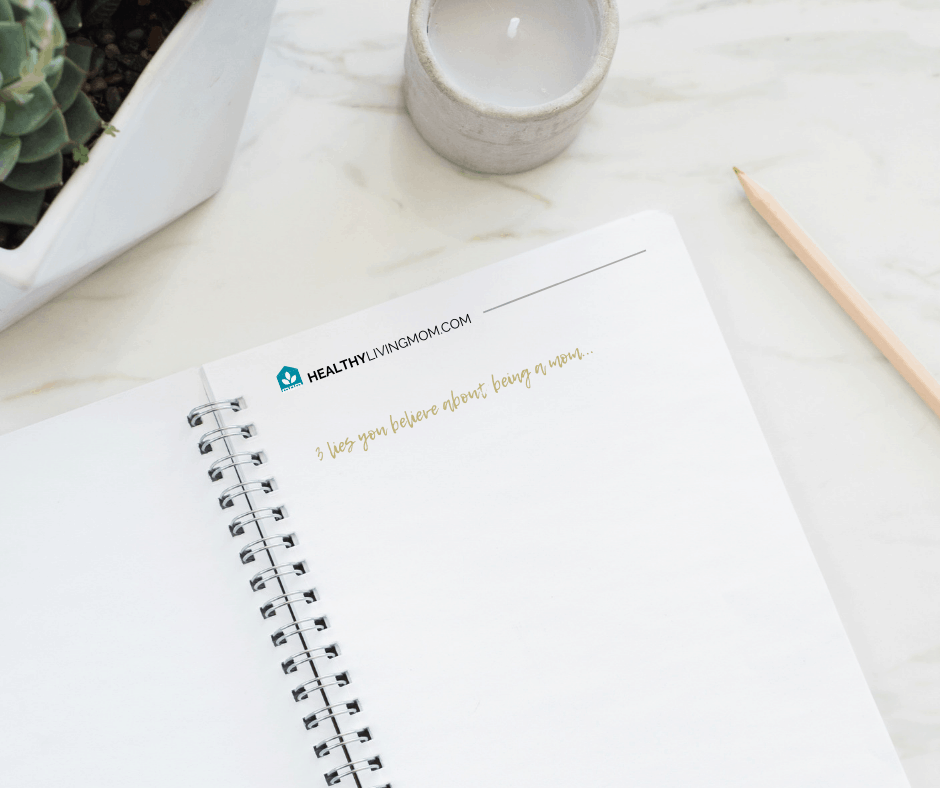 Being mom all the time was a little bit of a shocker to me, despite hearing from everyone that my first few months was feed the baby, eat, sleep, repeat. Except, I think I missed, that the sleep part was like for 2 hours at a time. I thought I could prepare well for being… 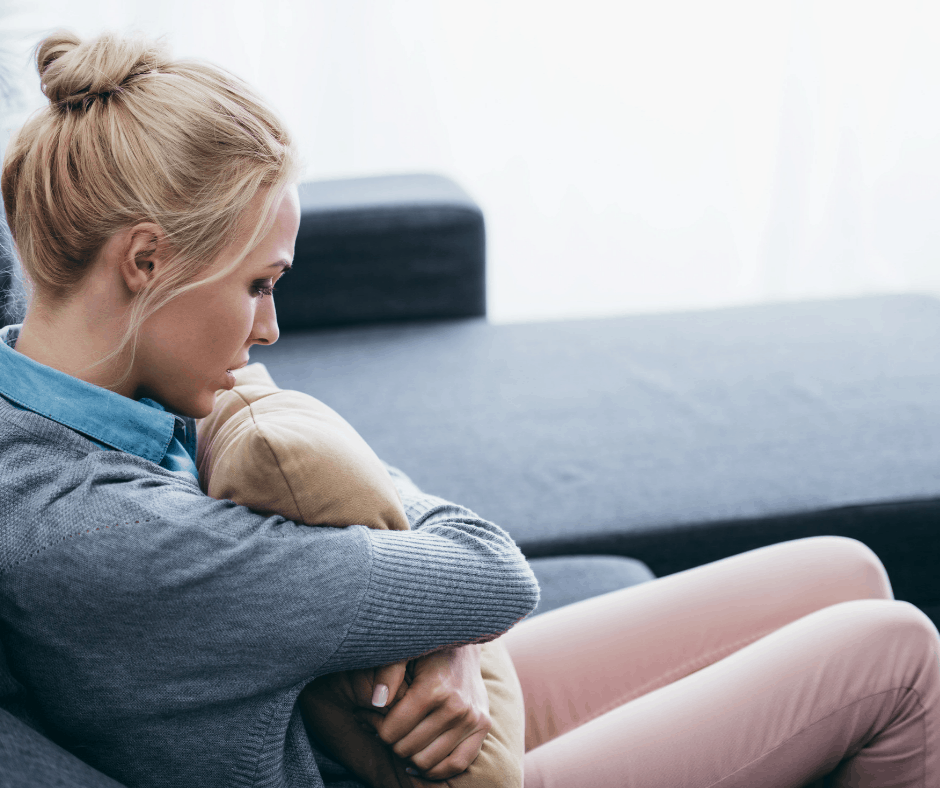 Being an overwhelmed mom was the last thing I ever thought I would be. There were times in my single life when I would feel overwhelmed. But it was NOTHING like what I experienced after becoming a mom. I just felt paralyzed, frustrated, and defeated. And…I felt that way ALL THE TIME. It never stopped…. 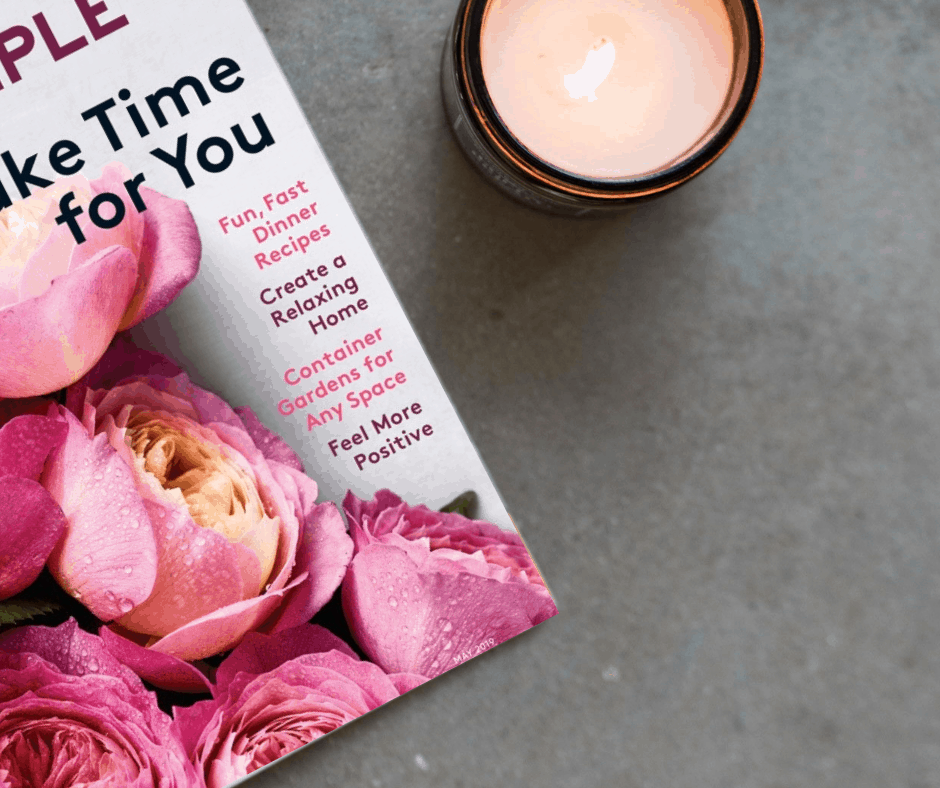 “You’re not really good at being a stay at home mom.” The words stung as they rolled off my husband’s lips. The hardest part about it—he was right. Our house was a mess—things were scattered everywhere. There was no sense of consistency or fun in our lives. I was emotionally and physically drained. I was… 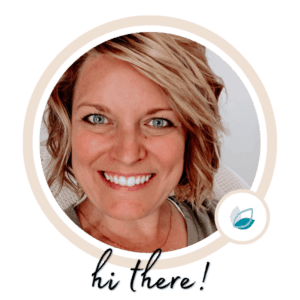